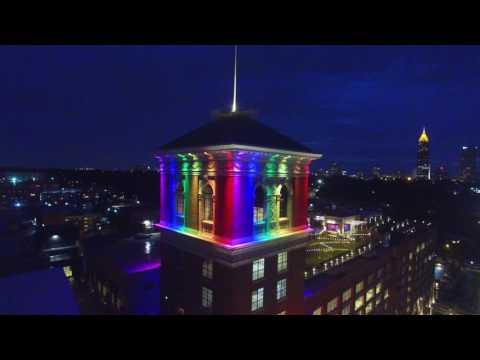 While we are at the end of Pride Month, an annual celebration by lesbian,  gay, bisexual, and transgender people that promotes equal rights, dignity, and positive affirmation I think about the symbol of pride. The rainbow, its beauty, and its symbolism. Like most symbols, it is not perfect, but I love the ideals it stands for. One of the things that I appreciate is seeing buildings in my community lit up like signifying pride or rainbow crosswalks in parts of town that are popular with the LGBT community. Pride month is all about celebrating diversity whether it comes in the form of sexuality or gender. With that said, I have a moment where I want to facepalm, when hearing someone decree, "why isn't there a heterosexual pride month?" That comment is one lacking in self-awareness of the privilege that heterosexual people enjoy. There's privilege in having one's marriage recognized by the state, employer, family, and medical provider.
For me, Pride means that I can be an ally to my LGBT brothers and sisters. But, more than my being an ally to them, my community chooses to be an ally too. When City Hall, Ponce City Market, or businesses are lit up, there is a validation of another's humanity and free will. Far too often in our history, we have failed to do that as a community. We have left the vulnerable amongst us unsafe. We have allowed them to be subject to violence and invasions of their privacy under the guise of keeping children safe. This issue is personal to me because of an acquaintance from college, Kim Morris, was one of forty-nine people murdered in the Pulse Nightclub in Orlando last year. Pride with its symbolism means safety to me. On the anniversary of the shooting, Atlanta Mayor Kasim Reed announced that "I believe that symbols of unity matter; in recognition of the outstanding and ongoing contributions of Atlanta’s LGBTQ community to our city, I am pleased to announce today that the City will install the rainbow crosswalks at the intersection of Piedmont Avenue and 10th Street year-round. This intersection in Midtown is recognized for its history as a hub for Atlanta’s LGBTQ community, and it is fitting that such an important and recognizable place should feature the rainbow flag. We must never forget that love defeats hate, and light defeats the darkness.” The moment resonated with me because I had thoughts of pride, love, love for my city and that this is what leadership looks like. It matters to me that we as a community are clear that everyone matters and that everyone should be safe. Therefore, the question is what have we done and what will we continue to do to foster safety, love, unity for all in our lives.