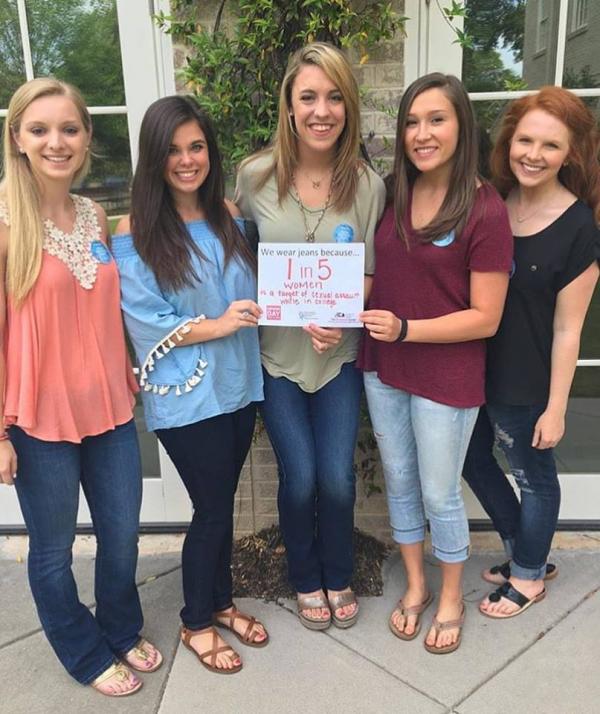 In our previous blog, we talked about an example of awareness being confused for prevention. While awareness is not primary prevention, awareness can be beneficial. A well-known example of community awareness is the Denim Day Campaign. Denim Day, also known as Jeans for Justice, encourages people to wear denim to speak out against sexual assault during a Wednesday in April in honor of Sexual Assault Awareness Month (SAAM). The campaign was originally triggered after a 1999 ruling by the Italian Supreme Court overturning a rape conviction. The Italian Supreme Court’s reasoning was that “it is a fact of common experience that it is nearly impossible to slip off tight jeans even partly without the active collaboration of the person who is wearing them,” thereby implying consent. Female legislators in Italy were so shocked by the ruling that the next day they came to Parliament wearing jeans in solidarity with the victim to protest the Italian Supreme Court’s decision. The image of those female legislators went viral. Soon after other legislators, activists, as well as men and women from all over the globe began wearing jeans to protest the ruling. In the coming years, a few defendants in Italy employed the “Denim” defense.
In 2008 a case involving the same Italian Supreme Court overturned the original 1999 ruling by stating in the opinion, “wearing blue jeans cannot prevent a woman from being raped or imply her consent to sexual intercourse.” Today, people all over the world make a social statement to wear jeans on Denim Day to protest misconceptions around sexual violence and victim blaming. Denim Day events are often coupled with programming to educate the community about the problem of sexual violence their communities and provide information about accessing services. For example, the photo accompanying this blog features University of Georgia students donning denim while holding the statistic that one of out of five women are sexually assaulted while in college. Denim Day encourages people to challenge societal norms and beliefs about sex and sexuality. People are also encouraged to stand in solidarity with survivors and say that one’s clothing is never an invitation or a justification for sexual violence.