Fake or Forsake the Shake 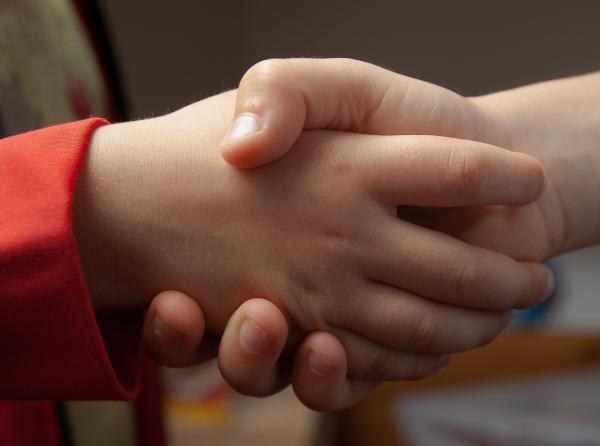 I often think back to growing up and being introduced to people who were older than me. I would get instructions about looking my elders in the eye, stating my name clearly, and speaking up. I was taught to be polite and say phrases like "yes ma'am," "no sir," "please," and "thank you." These things that one learns as a child are examples of rules and norms. A norm is just a standard of what one is supposed to conform to as a man. There are so many of these rules or norms that are expected of young men. One of these rules involves greeting others and shaking hands. My parents often told me that a firm handshake was a way to impress others. If I wanted to be taken seriously as a man, the last thing that I needed was a weak grip. A soft grip indicated that a man was not assertive or capable of making a good first impression. In some ways, I get that. These rules apply to business. These rules apply to friendships. They are norms that are based on social conventions.
When these norms become problematic is when we don't look at them. We don't question them or examine the meaning the behind them. Is it just a handshake or is there more at play? One way this norm has been abundantly clear to me is how young men engage in conforming to this norm. By having a handshake that wasn't strong we were shamed into being seen as vulnerable or incapable.  So what resulted was young men squeezing each other's hands because they were playing out the roles they were taught. Society and people we looked up to taught us that weakness was unacceptable. So to counteract that, we moved in our initial meetings with boys our age to engage in dominance and aggression. I remember many of these handshakes. I remember having my hand squeezed and my arm contorted to the point of pain. After the first couple of times that happened, I learned to position myself to not to let my peers manipulate me or my body. Sometimes I was made to succumb to the will of others. And other times, others were made to submit to me. My peers and I were prepping ourselves for battle. Ironically, these exchanges often looked like the beginning of a professional wrestling match. It was as if Hulk Hogan and The Rock squared off in a test of strength. And we mimicked The Rock and the Hogan in the schools and on the playgrounds we congregated on. We were waiting to do battle because we had all been taught that manhood meant being ready to fight. We could not let anyone see us as weak because that would say that we were not worthy of being men. That would mean that people could take advantage of us. Manhood means being strong. Manhood means showing no weakness. Manhood means that others must know our power, might, and force.
These interactions are the epitome of how we are socialized. They illustrate a culture in which men are taught that they can't be like women. They demonstrate a culture where we value men for displaying their dominance and aggression. In other words, if a man wants to be successful, he has to embody these traits. And then we wonder why men camouflage themselves in dominance and aggression while hiding away the vulnerable and hurt parts of themselves. This socialization outlines the importance of social norms.  It is important to note; one could say that the men and women who coach young men to have firm handshakes are just re-teaching the lessons society taught them.
See, it is never just a handshake. When a simple handshake becomes criteria for judging who is and who is not a man, the entire world loses. We all lose out on the nuanced ways that we can all move through the world. The possibilities and masculinities are endless. The tragedy in this is that both adult men and young men lose because they are taught they cannot be tender, warm, vulnerable, or express weakness in a simple greeting. Moreover, the world suffers because we do not have an example of the multiple ways of being. The world loses because we only look at masculinity one way instead of seeing multiple masculinities and ways of being.