Getting the Gist of Daily Lists 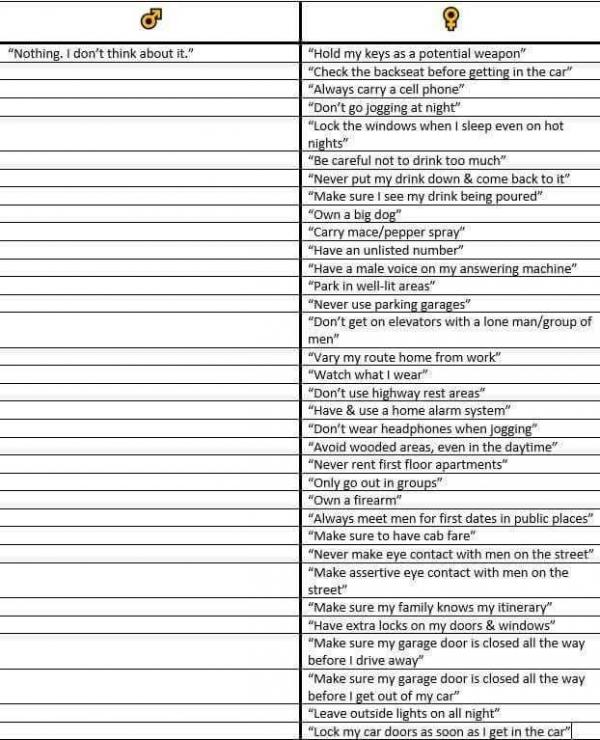 One of the powerful experiences I often have out in the community is going through this exercise that speaks to sexism and the pervasiveness of how the sexes think about sexual violence. The photo accompanying this blog is a visual representation of what actions men and women take on a daily basis to avoid sexual assault. The exercise was first facilitated by Jackson Katz, and it speaks to the scope of the problem in how women experience sexual violence in our communities.
To start the exercise, the facilitator asks men to think about actions that they take on a daily basis to avoid rape. Often after that question is asked men shift nervously in their chairs. The sit quietly, and a few reasons will come out. For example, a man will share something in a joking manner like "don't go to prison." For the most part there is silence from the men and while this minute is going on the women in the room will often knowingly look at each other.
The energy in the room shifts from silence as the facilitator then turns to the women and asks them to list the actions that they take on a daily basis to avoid sexual assault. In contrast, to the men, the women are ready to go. There's an excitement to share all of the things they do to avoid sexual assault. Often the facilitator has trouble recording all of the answers that they hear from the women on the board. I have seen examples of this facilitated where two or even three sets of hands struggle to document all that's shared. That minute flies by in contrast to the men as answers are recorded. After everything is recorded on the board, there is a check-in.
The facilitator checks to see what the experience is like for everyone. Additionally, a man often looks at the list from the women says something like, "I have never done any of those things" or "I've never thought about being sexually assaulted". And, that is the point. To get men thinking about what it is like to navigate the world as a woman. The sad thing is that a list like this one is not exhaustive. But, it illustrates how women move through friendships and relationships with men they know. It's saddening to think of the amount of work women have to do to manage friendships, work, and relationships with men. But, it is so much bigger than just friendships, work, and relationships. Women could see every man for the potential danger he can be to her. Moreover, she has to make choices in her relationships to prioritize her safety in ways men do not. Most of the things on the lists from the women address stranger rape that's a teachable moment because we know that someone that's not a stranger to the victim commits the majority of sexual assaults.
At the end of the day, these lists and this activity speak to the reality that women and girls experience. We should not have to "teach" girls more than we teach boys. There's something wrong about having to prepare women and girls for that reality. Women carry enough stuff in the world. They should not have to fill out a literal checklist of things to do daily to avoid violence at the hands of a man. It's wrong, and as men, we should demand better for our sake as well as theirs. I do not want every woman I come into contact with having to safety plan because of how the guys that share "Y" chromosomes with show up. Part of culture change is realizing this is the problem so we can take steps to fix it. It's using [our] privilege to call out disparities we see and know are there. In addition, you can "be prepared" and not prevent women experiencing violence at the hands of men. A woman could do all these things and more and not prevent it. So, instead of preparing women, how about we start talking to the men committing all this violence. If we change the culture, then women could live their lives as people, just like men. That's the point. That's the work. That's the ask.