Individuals and Institutions Working in Tandem 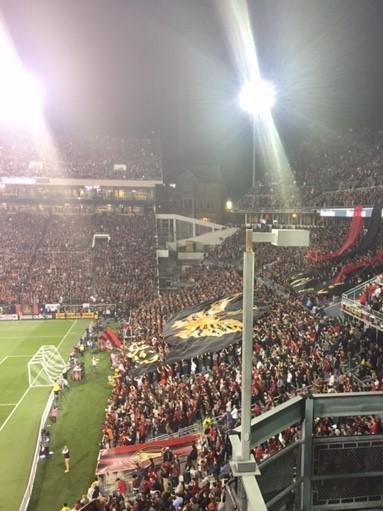 In a previous blog, I discussed the Atlanta United's response to homophobic chants that occurred during the first regular season game the team played. Part of the reason that it is so problematic was that it set up a clear hierarchy among men. The act of calling another man a male prostitute is not about whether that man is having sex with other women. The derisive nature of that slur is that man has to make his living having sex with other men. In other words, men that have sex with men are less than or not men. Men or manhood has traditionally been seen as superior and dominating. This slur and its use during sporting events reinforce that. This slur was categorizing some men as not real men, and that is the epitome of reinforcing rigid gender roles. Rigid gender roles are part of the messaging that informs men that they have to be dominating and controlling. Also, that messaging tells them that they are superior women. The result is a hierarchal system where manhood is a series of tests, and everyone gets judged about whether they measure up. There is tons of this kind of posturing in sports culture, but life in general.
I was encouraged by the strongly worded statement that came from the club condemning the use of offensive language and threatening the removal of fans engaging it from the building. As much as I was encouraged by the statement,  another response to encourage fans to "show racism the red card" challenged me because the tifo targeted racism as opposed to the homophobia we witnessed in those chants. The press release from the team the night after the opener spoke openly to the problems that were witnessed by many in attendance, but what happens after that. A team can release all the strongly worded statements it wants, but true change happens when the community becomes engaged. After all, if the United made their statement and all the fans continued to participate in the chant could they feasibly throw everyone out? What does a community standing up to say that they will not tolerate homophobia look like?
Supporters groups are fan clubs that include the most passionate, creative, and fervent fans of the team. The supporters groups sit in sections close to the pitch and lead the entire stadium in chants throughout the match. According to the Atlanta United FC, the mission of the supporters groups is "to support the great game of soccer in and around Atlanta. The Supporter Section exists as a means to coordinate all the things that our supporters do. We promote playing the game we love and facilitate supporters culture through creating tifo displays, working with the club management in resolving issues, and arranging travel to away matches." These groups also have watch parties and tailgates and exist to merge Atlanta, soccer culture, and southern sports traditions. Additionally, part of their purpose is to create an atmosphere of inclusivity that welcomes fans of all backgrounds. Through four supporters groups, Resurgence, Footie Mob, Terminus Legion, and Faction, members created and led chants to replace the homophobic chant heard at the first game. A longtime friend who is one of the supporters groups told me, "All of the supporters groups are against the chant and are working with the team on ways not to have it take hold. A lot of people just don't know what it means and are receptive to stopping once you tell them." The collective response of the club and the supporters groups are the epitome of "be the change." They have collaborated to change the culture by intervening with Atlanta United fans to create an atmosphere of safety and inclusion. It is an example of what can happen when institutions collaborate with people to solve a problem. They are changing the culture one goal kick at a time.