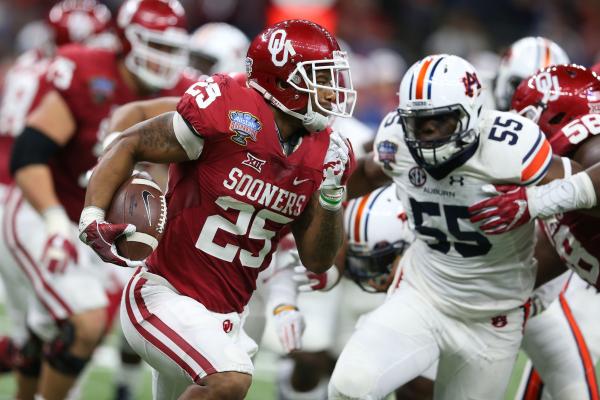 I recently wrote blogs about Joe Mixon and Brent Musburger, two of the subjects I am coincidently writing about today. I believe that seemingly benign moments can provide us with insight about how to challenge norms in our communities. A great example of this is Brent Musburger sharing his thoughts about Joe Mixon during a live broadcast of the Sugar Bowl. To reiterate, Joe Mixon physically assaulted another University of Oklahoma student named Amelia Molitor by punching, breaking four bones her in the face. Mixon was redshirted for his freshman year, meaning his only punishment was not being allowed to play football for the University for a year without losing any eligibility.
During the second quarter of the broadcast on ESPN, a graphic popped up on the screen detailing a timeline of events. Musburger started the discussion by saying,  “[We are all] aware of the controversy surrounding this young man in recent weeks. But back in 2014, he punched a female student back in Norman. He was suspended the following month for the entire 14 season. Oklahoma thought he might transfer. Well, the video was released in 2016. It was released by Mixon and his attorneys because they knew that the media had sued and it would eventually get out. It was troubling to see. We’ve talked to the coaches and uhh they all swear that the young man is is doing fine. Uhhhh, like I said Oklahoma thought he might even transfer, but he sat out the suspension [he was] reinstated and folks he is a… he’s just one of the best and let’s hope given a second chance by Bob Stoops and Oklahoma let’s hope that this young man makes the most of his chance and goes on to have a career in the National Football League.”
Even though I am an avid football fan, I intentionally did not watch the Sugar Bowl because I dreaded hearing something like this. “He’s doing fine” was a very tone deaf response. There was no mention of how Molitor is doing. There was no mention of how this happens far too often in our communities. Brent seemed more concerned with whether Mixon was transferring. It is great that Mixon has not been “in trouble” since; most schools would have sent him packing because not punishing or expelling him sent a bad message. No mention of the young woman who had four bones broken in her face after Mixon punched her and how she was impacted; the woman who had to have her jaw wired shut and didn’t miss a single class. We need to start having a conversation about what community accountability looks like. It’s more than sitting out for a year, the community justifying men’s choices, a University choosing a star athlete over another student, or having respected broadcasters wish him “a long [NFL] career” on national television during a big game. Victims do not get those benefits.
I am disappointed because Brent Musburger, a man who has been in broadcasting since 1968 and longer than I’ve been alive, should know better. I would not be honest if I did not say that in my youth I looked up to Brent Musburger. I saw him as a role model and emulated things he did when I got the privilege to broadcast football games in college. I struggled to write this blog because how Musburger showed up in the booth left me disillusioned about a man I respected.
I wish that could have been the end of the story for that night. But, that was not Musburger’s final soundbite of the night. It is likely that Musburger’s comments about Mixon went viral; maybe Musburger noticed he was trending on his social media or a producer came to him during a commercial and encouraged him to rephrase his point. Unfortunately, the opposite happened. Rather than hearing the public reaction to his words, Musburger doubled down on his original point by stating, “When I wish this young man well at the next level let me make something perfectly clear. What he did with that young lady was brutal, uncalled for, he’s apologized, he was tearful. He got a second chance. He got a second chance from Bob Stoops. I happen to pull for people with second chances okay. Let me make it absolutely clear that I hope that he has a wonderful career and he teaches people with that brutal violent video OKAY!”
Brent’s indignant “okay” at the end of his diatribe was a bad look. People in my life excused this as someone responding off the cuff when I challenged it. As someone who has worked in broadcasting, let me say that nothing is off the cuff in the booth. It is not like Brent showed up five minutes before the game to talk about some stuff off the top of his head. Musburger knew who was playing. He knew the stories he wanted to tell. That graphic describing the timeline of events was prepared prior to kickoff.  It is not like hackers cut into the Superdome video board, broadcasted the video live, and we all watched the video for the first time together on ESPN. Mixon was arguably the best “story” of this game. The fact that Musburger thought about what he was going to say and this is what he came up with is disappointing. We have to start having dialogues in our communities that talk about violence in actionable ways. We have to start having dialogues in communities where victims are not invisible. We have to start having dialogues in communities where we have real conversations with men about our beliefs, attitudes, and actions to stop this. We have to respond like Twitter did when we hear challenging beliefs and attitudes from media. Brent Musburger missed an opportunity to have a poignant dialog about a serious subject. I am hoping Musburger does not miss his next opportunity.