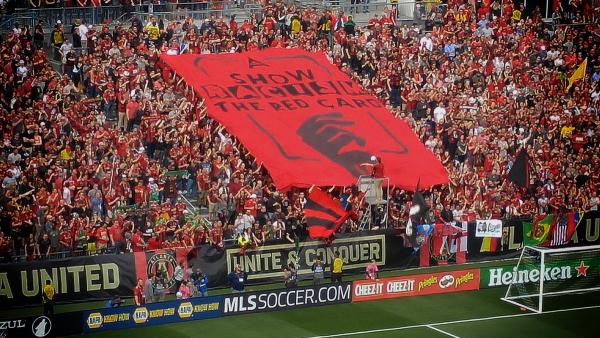 I recently wrote about segments of Atlanta United fans who engaged in a homophobic chant during the soccer club when the team played its very first game in early March at Bobby Dodd Stadium. One of the overarching principles for me was that when we participate in hate speech, we become part of the problem. The Atlanta United Field Club responded quickly condemning the use of the puto chant saying, "[the] Atlanta United does not support or condone the use of offensive language" and warned that fans engaging in this behavior would be subject to removal from the building.  So, you had to wonder what would happen at the next game. Would fans continue to engage in the chant? Would there be some public service announcement, educational campaign, or awareness effort to educate the public about the Atlanta United FC's stance?
It turns out there was another development at the next Atlanta United FC home game. Some fans in supporters groups were aware of the chant had been educating other fans using it about its meaning and why that was not cool. Also, the team unveiled a tifo to speak to these events. A tifo is a choreographed display where fans hold up a banner up signs together that publicize a message. Tifos are more common in professional soccer, but we often see similarly choreographed banner displays during in stadiums during Superbowl halftime concerts. Another well-known example of a tifo is attendees holding up cards forming the image of the flag of the United States of America during the singing of the Star Spangled Banner. The tifo unveiled at the second Atlanta United FC game read, "Show Racism the Red Card," seeming to take aim at the slogan used by some fans during the previous home game. This tifo honestly challenged me. Historically, racism has been an issue in professional soccer. Real Sports With Bryant Gumble did a piece in September of 2005 titled "Fields of Hate." The newsmagazine featured world class players like Thierry Henry discussing being subject to racist chants calling him and other black players monkeys or having bananas thrown at them. Clearly, none of that behavior is okay. But, my challenge is around calling the puto chant racist because that misses the mark. Puto is a gendered term. It is homophobic, but not racist. That nuance matters. So, why would the team declare a chant as racist when it is homophobic instead? I want to think that the people at the Atlanta United FC are well intentioned and this tifo just missed the mark. That is the story that I need to tell myself. On the other hand, I think people know the difference between racism and sexism. Could it be that it is easier for a team to take a stand against racism because culturally it is simpler to draw that the line?
The work we do in our communities must be about making sure that we hold people accountable when lines get crossed. To borrow from the Atlanta United FC's declaration, they "strive to foster a positive, enthusiastic and inclusive environment for all fans, and inappropriate chants have no place at our matches." If people do not know what is inappropriate about a chant, then is our work to educate about that chant effective? As important as it is to name when lines are crossed, we commit another injustice when we do not correctly name the line crossed. It is like saying the hurt and pain of unnamed others does not matter. That is not inclusive. The Atlanta United are saying that all fans matter. All fans are welcome because being United means being inclusive. If an environment is inclusive, then it is welcoming to everyone. It means that we are not going to take something that is homophobic and classify it as racist because it is less acceptable to be racist in 2017 than it is to be homophobic. Maybe the Atlanta United FC thought it was enough to issue their statement and move on; maybe the United are working on something else to address the chant. The work of institutions is ongoing, and when they make mistakes while trying to be accountable, we must still engage them. We must still hold them accountable. When we do not call out hate speech for specifically why it is hate speech, then we are still part of the problem.