Moneyed Men and the Male Gaze 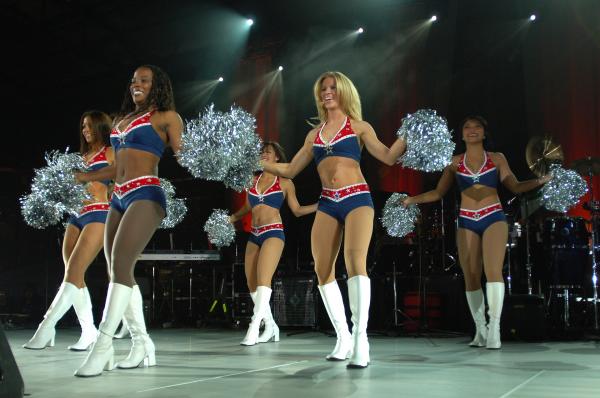 One of my blogs last month discussed a story that had come out recently in the New York Times, talking about a New Orleans Saints cheerleader filing a complaint against the team with the Equal Employment Opportunity Commission. The blog dealt with the entitlement many male fans felt around the bodies of the female cheerleaders and how the NFL and society have turned a blind eye towards men’s behavior in the stands. The original complaint alleged that the Saints have a set of rules for cheerleaders and a different set of rules for players. Players were not reprimanded for fraternizing with cheerleaders, but the cheerleaders were held to a different standard. For example, cheerleaders were required by the Saints to "block players from following them on social media and barred from posting photos of themselves in Saints apparel. Saints cheerleaders were prohibited from speaking to the players about anything of detail, but players were not restricted from speaking to them. They were not even allowed to eat in the same restaurant as any NFL players. If a Saints cheerleader enters a restaurant and a player is already there, she must leave. If any NFL player arrives while she was eating, then she is still required to leave. That lawsuit is progressing, but as details come out, we learn that there is more to this story.

The New York Times spoke with Washington Redskins Cheerleaders about a trip the squad took to Costa Rica in 2013. The purpose of the trip was shooting photos for a calendar; several sports franchises create similar yearly calendars featuring their cheerleading squads. What was interesting about this trip was multiple cheerleaders were required to pose topless for a calendar. In other words, the organizers of the trip did not ask for volunteers. Also, some cheerleaders were made to remove their tops even though there was never an intention to use topless photos of them in the calendar. The team invited an all-male group of VIPs including sponsors and suite holders to watch. As if that was not bad enough, following the photo shoot, the team required a quarter of the squad to visit a nightclub with the all-male VIPs. The all-male VIPs handpicked which cheerleaders would be their "personal escorts" for the nightclub excursion. Many of the cheerleaders reported feeling "pimped out" by the team. They were not asked. There was no checking in. They were told to go. There was no gun put to their heads, but the coercion was clear.

There is so much here. Again we see entitlement around women's bodies. Women are expected to deal with the male gaze. It is the price of admission or part of what it means to hold this job. I can already hear people proclaiming, "those cheerleaders know what they signed up for" or "what did they expect when they applied for the job?" I find myself challenged by that. I think the women expected they would have to deal with some rowdy fans or gently let down someone infatuated with them. I can see a cheerleader excited because she dreamed of being a cheerleader for a professional team because she loves football. Maybe she thinks it is glamour or wants to get up close to the players. I do not believe it is reasonable for women to expect to have men look at them naked as a perk for buying a suite or advertising. While it may be a norm, it is not reasonable for women to expect to be picked out of a lineup like they are in a brothel.

This is not clean. The Washington Redskins treated their professional staff like escorts under the guise of sending them on a trip to perform a professional responsibility. Some of the cheerleaders were crying because of the situation. I get it. The series of choices made by the Washington Redskins are appalling, and sexism is clearly at play here. I can’t imagine a similarly coveted job where a man would be expected to perform such tasks. I can’t imagine a similar position in which a man would be expected to conform to these expectations. Furthermore, these stories illustrate the disparity between how women are held to a different standard than men. Women can't fraternize. Women have to block players on social media. Women can't post photos of themselves on social media in team apparel. Women can't eat a meal in the same restaurant as a player. Women can't say no. What does it mean for women when we tell them that they can't say no in a professional setting? What does it mean for men when they know that? What does it mean when men and women are held to different standards? It means that women are seen as objects; objects that serve a purpose to look pretty or use. That's not the NFL I love. As a football fan and a man, I am disillusioned and troubled by these practices. It is disappointing to hear about fellow fans and NFL franchises treating women this way. Not only, what is the meaning of these norms for men with money and the rest of us?