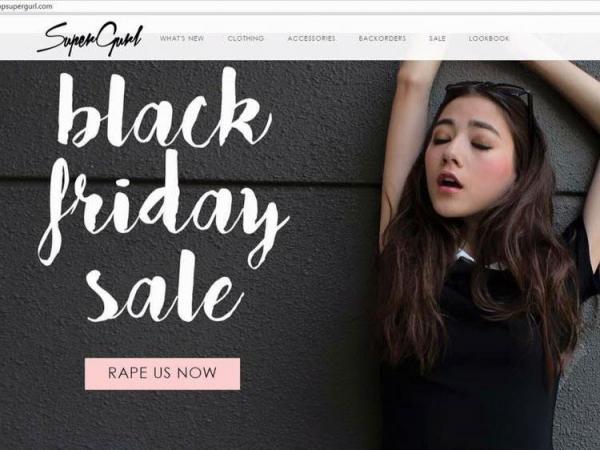 In a previous blog, I have written about how raising awareness can be beneficial when talking about sexual violence and that awareness is not primary prevention. Raising awareness if vital because we as a society have not taken sexual violence seriously. Sexual assaults are minimized with words like misunderstanding or miscommunication. Other sexually violent behaviors like cat calling or street harassment are minimized as compliments. Also, mass media is another example of societies minimization of the impact of sexual violence on survivors.
This minimization happens because our culture has a problem with how we deal with sexual violence. An example of how our culture affects us is the media. The messages that the media puts out about sexual violence affect our beliefs and attitudes about both survivors and perpetrators. The Singapore retailer SuperGurl released an advertisement for Black Friday in 2015 that was problematic. The ad was on their website and featured a photo of a young woman provocatively posed. Underneath the picture was a pink button that shoppers would click on with text that read "rape us now." So, we have a retailer that sells clothing to women that thinks that making a mockery out of sexual violence is an effective marketing strategy to sell clothing on the biggest shopping day of the year.
The whole thing is just disheartening in a year where sexual violence dominated the news. It is baffling that a retailer would do something like this to advertise Black Friday after the Bloomingdale's ad that has been written about in this blog. Also, the image is so disturbing because it equates rape with sex. We have to stop that messaging. Rape and sex are not the same things! Sex is consensual and rape is not. It is a false equivalence. As someone working to end sexual violence, I felt appalled. The tone of the advertisement felt creepy. Again, I'm amazed that this company, the digital content director, and the advertising agency that works for them thought this was a good idea. SuperGurl thought that this ad would make them more money selling clothes. Also, it is challenging that some equate getting a fair price on clothes to rape. I like getting a deal as much as the next person, but the analogy was tone deaf.
Media is one of many teachers, and the reality is that men and women are listening to these messages society gives us. I don’t want a world for the young men in my life that condones taking advantage of people. Taking advantage of people is never something that should be encouraged. We have to be better than that.