More Than Just An Outlier 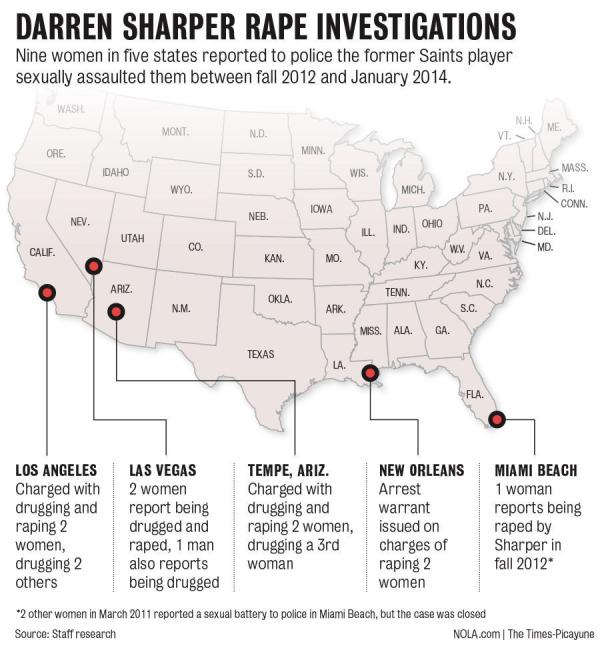 In my last blog I wrote about the Men’s Fitness article by Nick Savoy titled “How to Turn A ‘No’ Into A ‘Yes’”. The article was awful in how it coached men about “plowing ahead” and ignoring what women want while dating. It was a primer on ignoring consent and placed male desire for sexual contact above what women wished. So, what happens when the techniques used in an article like Savoy’s are not enough? What happens when men turn to alcohol/drugs to facilitate sexual assault? With football season on the horizon I think about the case of former National Football League player Darren Sharper. Sharper played safety for the Green Bay Packers, Minnesota Vikings, and New Orleans Saints. Sharper was a standout at his position earning five Probowl selections, two First Team All Pro selections, a spot on the NFL 2000s All Decade Team, and was a leader on the New Orleans Saints when they won the Superbowl in 2010. Sharper was well liked, respected, and the epitome of a successful player who earned praise on the gridiron and parlayed his success into a career in broadcasting with the NFL Network following his retirement from the field.

But, Sharper is known not only for accolades earned during his playing days. In January 2014 Sharper was arrested in Los Angeles on two separate counts of sexual assault. During that same month New Orleans Police indicated that they were also investigating Sharper for a sexual assault that was reported in September of 2013. In February of 2014 Sharper was charged in both Los Angeles and New Orleans and in December of 2014 he was indicted by a grand jury in Orleans Parish. In March of 2015 charges were filed against Sharper in Arizona and Nevada. As more women came forward it became clear Sharper was a serial rapist. In that same month Sharper’s lawyers negotiated a plea agreement, resolving all the charges against him, which would result in Sharper serving nine years in addition to the year he had already served. A criminal justice response of nine years for a serial rapist who admitted to drugging and sexually assaulting several women in four states is embarrassing. This sentence would likely have stood were it not for public outcry. The original plea deal ended up being rejected by another judge in February 2016 due to it not meeting the federal sentencing guideline of 15-20 years; a new plea deal was reached following the sentencing guideline, but Sharper is still waiting to be formally sentenced in several jurisdictions.

But, the criminal justice response is not what most intrigued me about this case.  It is troubling that many peopled wanted to make this just about Sharper like he is an outlier in need of fixing, and that his behavior was not the norm. I want to be clear by stating that a lot of men use alcohol with the intention of engaging in sexual contact with women whether sex is desired or not. We know that bystander invention programs take place in bars all over the world because there are lots of men that make the choice to drug women with the intention of sexually assaulting them. Also, it was saddening and disappointing to hear folks say Sharper was "good looking, wealthy, and could have had anyone he wanted.“ Just think about that statement and what is being said. That statement is basically saying [any] woman will have sex with anyone for money which is sexist and stupid. As a man, I don't have sex with "anyone" for money, so why would anyone else. It is problematic that I even have to qualify my statement by writing “as a man”. Also, making this statement about these women is victim blaming because it is implying that Sharper’s victims agreed to sexual intercourse when the facts say differently. Equating sexual assault with sex minimizes that a crime took place; this is someone who admittedly drugged many women over several states and some equated Sharper’s acts to consensual sex. That is nonsensical! This was sexual assault and this was a crime that was committed repeatedly and brazenly.

As a society why do some of us focus on the victims of a crime instead of Sharper's repeated choice to ignore consent? Darren Sharper committed these crimes because he has the same beliefs and attitudes a lot of men do. He did not care about consent and felt entitled. And, this case is not the first time I have heard this problematic narrative. This problematic narrative is present whenever anyone accuses a prominent man of sexual assault. It is like a prominent man’s status makes him above accusation. Many make an assumption of innocence without coming to the realization that prominent men could commit these crimes because they are powerful and they think that they will get away with them. That is why many men use alcohol as a tool to facilitate sexual assault; they think they will get away with it because their victims will not be believed. We need to be clear that a lot of men feel entitled to women’s bodies and that these attitudes are cultural. An entire industry exists to coach men to utilize the techniques from that Men’s Fitness article. Most men are not rapists, but most rapists are serial rapists. Above all, we need to be clear that Darren Sharper is not an outlier. There are Darren Sharper’s in our churches, universities, and civic groups. They run businesses, drive trucks, coach our kids, and are seen as leaders in our communities. We look up to them. We celebrate them, revere them, and place them on pedestals. But, will we continue to make the same choice to revere these men and think they are above accusation the next time a survivor comes forward?