Not So Rad Conversations With Dad 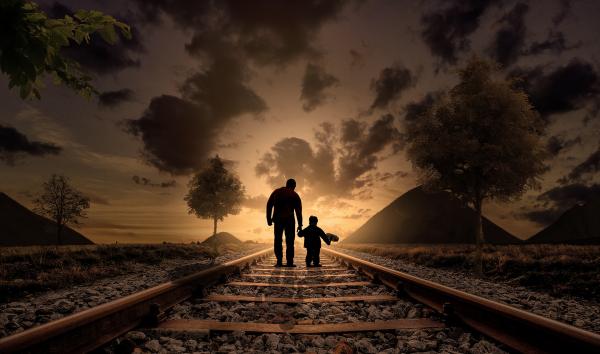 I view this blog as partially talking about the work and what it means to do the work. But, what if the work is us? At times I have left myself out of asserting "my work" in this blog. What does it mean when the work we have to do is on ourselves? What does it mean when we have to work on the beliefs and attitudes that we witnessed from our teachers, mentors, and friends?
One series of moments that illustrate this involves riding in the car with my father while I was in middle/high school. He would pick me up from the bus stop after band practice or debate, and there was always something consistent about those car rides and our interactions. We would ride in the car, and as he drove, he would comment on women walking down the street. How one had a big butt, was cute, or that he liked the way a random woman's hips swung as she walked.  These observations were often shared in crasser terms than I have described and in response, I would often ride in silence.
Other times I would walk to the car saying goodbye to a female friend. After the door closed, my father would comment on my friend's body and inquire whether I was interested in her or if we were sexually active. I was a teenager, and I remember feeling bothered by these conversations. In other words, something did not sit right with me in regards to them. These interactions were common. It was what we did. For all I knew, it was how guys bonded. My father is not an outlier. He is the norm in terms of how a lot of men I knew moved.  It was not uncommon for me to be around men having conversations like this about women. It is not like my dad acted any different than various men I came into contact with in multiple spaces from varied socio-economic and ethnic backgrounds.
These conversations speak to socialization. They speak to a culture where my father like many other men did not value women. It is weird to say that about my father, whom many would consider a family man. These conversations speak to a culture where we value women's body parts more than their beliefs. And, this socialization taught me to make similar choices to his. Why did I not choose to make the same choices he did?  Why did I make choices different than what was laid in front of me? How was I influenced in my relationships with women by these conversations? What did I think I was entitled to from women?
Let me be clear. There are a lot of things that I admire about my father. I do love him for the many of the values and qualities that he instilled in me. But, I would be lying if I did not state that there were times I did not like him or all the lessons that he taught.
The lessons in these conversations outline the importance of social norms.  One could say that my father was using the playbook society taught him.  Or, maybe these conversations were his clumsy attempts to have a bond with a son he did not wholly understand. In some sense, I chose to move differently as a man doing this work, because I value the women in my life for more than their body parts.