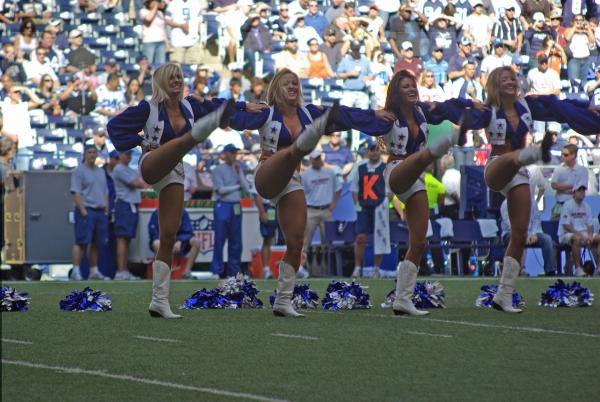 Let me say right from the start that I love football. I say all of this as an avid football fan that has had season tickets for seventeen years, but a story has come out recently in the New York Times talking about a New Orleans Saints cheerleader filing a complaint against the team with the Equal Employment Opportunity Commission. The complaint alleges that the Saints have one set of rules for their cheerleaders, the Saintsations, and a different set of rules for players. What is fascinating is that this grievance has led to a flood of accusations from cheerleaders all over professional sports. These new accusations allege that sexual harassment and sexual assault are an expected part of the job for women working as cheerleaders in professional sports.

Bailey Davis, New Orleans Saints cheerleader who filed the original complaint, states that the Saints "tell us that we’re celebrities and to present ourselves well, but then they throw us out there with these drunk fans." These scenes of drunk men sexually harassing the cheerleaders contrast with the professional and polished image of the NFL we often see. Bailey shared, "you have to take pictures with anyone who asks. You can’t refuse a picture with anyone. If there’s a sloppy drunk who you know just wants to put his hands on you, you just have to deal with it and do it.” It is interesting to recall the NFL's far too frequent missteps in regards to players committing violence against women and discern if there are similar missteps in regards to fans. Ms. Davis' depiction of her interactions with fans seems all too common, as many cheerleaders saw uninvited touching and nasty sexual comments as part of the price they paid for cheering for a professional sports franchise. I imagine many of these women expected some trouble from unruly men, but joined these cheerleading squads as a chance to represent a franchise of a particular sport they enjoy. I doubt when they attended tryouts they imagined dealing with fans disrespecting their bodies or consent. A cheerleader for the Cleveland Cavaliers NBA team said, “I remember getting my butt grabbed by a 12-year-old who should’ve been kicked out of the game. For whatever reason, fans think they own you.” And that is the point. Fans feel entitled to grope and say inappropriate things. Also, that 12-year-old in Cleveland was taught that he has a right to women’s bodies, just like many of us were taught to disrespect women. That young man likely got a few attaboys like he hit a home run or got an A on a test too. The consumers of professional sports too often see cheerleaders as something else they can consume. There is no attempt to see a woman as a person or recognize her humanity. I have never groped a cheerleader, but I know that I have crossed boundaries and made women uncomfortable because of my choices; I know that and part of my work is to change that.

It's striking how some people spend time talking derisively about "those" athletes and the acts of violence against women they have committed, yet they ignore or perpetrate sexual violence happening in the stands. It's concerning how institutions across the landscape of professional sports have been negligent in creating safe workspaces for women. We know that the "regular folks" in the stands aren't creepers in dark alleys, and these scenes transcend the stands by being played out in the lives of "regular folks" nationwide. As a society, we have it wrong because we teach women to deescalate instead of teaching men that sexually violent behaviors are not okay. More than anything we have to realize that these problems are systemic. They cannot be eradicated by a code of conduct targeting players. Any code of conduct cannot apply just to the players on the field or court; it needs to be standard of behavior followed by all men because we are integral to both the problem and solution.