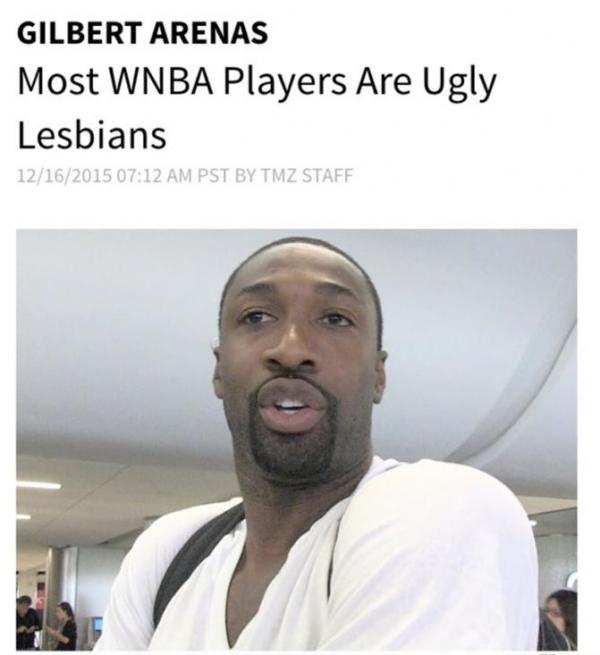 Basketball season has started and I found myself struck by a social media post written by retired NBA player, Gilbert Arenas. Arenas who used to play for the Washington Wizards, posted a photo on Instagram of two women playing basketball in their underwear outdoors with the caption, “NOW this is what america was hoping for when they announced the #WNBA back in 1996… not a bunch of chicks running around looking like, cast members from #orangeisthenewblack…dont get me wrong, they have few #cutiepies but theres a whole alotta #beanpies running around hahahahahaha if #skylardiggins came out like this,I dont care if she missed every layup..imma buy season tickets and I dont even know where the [expletive] #tulsa is hahahaha #2016newwnbaoutfitPLS and if u think this is sexist,9 times out of 10 u the ugly one and we didnt pay to come see u play anyway #donkeykong …smdh #thiswillbeawesome #soldouteverywhere.”

Lots of people responded to his Instagram post calling it out as sexist and ignorant. Arenas was shocked that people were offended and decided to rebut their arguments by posting another photo from a women’s football league originally named the Lingerie Football League with the caption “Ppl act like I said some [expletive] thats just down right sexist and rude…..str8 men are attracted to women RIGHT? Men are 80 percent of sportviewers RIGHT? So lets name a few women sports,that still attract the men viewers…#Tennis,omg they were short skirts like female..#trackandfield,short tights and crop tops,so we can see abs …”

There is so much here. There is blatant ignorance, sexism, homophobia, and misogyny mixed with a smattering of grammatical errors. Also, these statements do not value female athletes for their talent, but for their attractiveness. All that is missing is a caricature cartoon dog salivating at the sight of scantily clad body parts. Arenas does not see these women his peers or even athletes. If they were his peers, then he would appreciate their athletic talent. Their skill on the basketball court would be worth the price of admission. Tickets for the WNBA would sell out because these women are elite athletes instead of eye candy meant to titillate. Gilbert Arenas clearly states the way to sell out events featuring female athletes is to dress them up in sexy outfits. That is the epitome of seeing women as less than. In Arenas’ world men would not buy tickets to see athletes, but would buy tickets to catch glimpses of body parts. And, that sounds more like a strip club than a professional sporting event.

But, there is something else going on here too. Arenas is also saying that women who are not attractive need not apply. “Cutie pies” are welcome and “bean pies” are not. Moreover, Gilbert is saying that heterosexual men make up 80 percent of sports viewership and only pay to see women’s sports because the athletes are attractive. So, that is not true. The NFL estimates that 45 percent of its viewership is women and sees them as its most important demographic to grow the game. That is why its handling of Ray Rice’s violence towards Janay Palmer mattered. That is why October is cobranded with breast cancer awareness month. This is why the NFL makes fashion lines and jerseys marketed directly to female fans. The NFL is courting female fans because they know women buy tickets and that equal dollars for the league. With that said, I have always been struck by how sexuality factors into the marketing of female athletes. It is a clear example of the disparity of what we value in a male athlete versus a female athlete. Since Arenas brought up tennis, it is helpful to note that tennis stars that are not successful on the court can make far more from endorsements than from winning. It is a perfect example of an athlete being valued and even seen as successful because of how she looks as opposed to her ability on the court. Anna Kournikova was never at the top of her sport as a singles player, but was often to top earner in women’s tennis. As repugnant as Gilbert’s remarks are, his beliefs are closer to the norm of what many believe. The advertisers and magazines that compensate women to be models instead of athletes confirm this.

Is it likely that a male athlete would achieve fame and success based on his attractiveness? As a man, whether or not I am attractive has NEVER factored into my competence. I'm not judged on whether I am hot or not. I don't need to wear sexy outfits to get people to pay attention to me or earn a livable wage. So, what does this mean for all women? How is the average woman impacted by these beliefs and attitudes? As a society we have to start teaching men that women do not exist to beautify the world for men. Their existence is not about fulfilling the male gaze. Women are not only here to entertain, be decorations, or titillate. Women have lives, goals, dreams, and ambitions that are not just about fulfilling sophomoric male fantasies. And, all of this foolishness traps men in a toxic version of masculinity.

Above all, I do not believe that the only reason men watch tennis is to see women in short skirts. I watch women’s tennis because I play tennis and love the game. I grew up playing tennis. I love seeing world class athletes strive for greatness. I believe that there are men out there like me. When men fail to see the capacity in ourselves to be better human beings for that is a loss to the world. Above all, Gilbert Arenas should have known better as someone who worked hard to succeed as a professional athlete. It is a shame that some leagues so blatantly utilize sexuality to sell tickets rather than their athletes’ athletic abilities. Gilbert's comments were inappropriate, disrespectful, and childish.