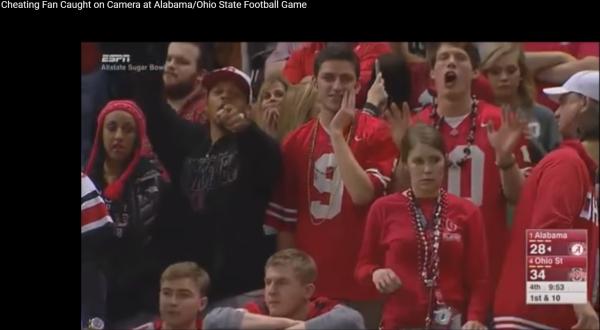 I recently wrote blogs about Joe Mixon, Brent Musburger at a recent Sugar Bowl. I want to continue this topic, not because anything that either of them did.  Again, I believe that conclusions drawn during seemingly benign moments can provide us with insight about how to challenge norms in our communities. So, what if the topic is not Musburger or Mixon? What if we are the ones scrutinized.
The scene is the Sugar Bowl at the Mercedes-Benz Superdome in New Orleans, Louisiana. The Ohio State Buckeyes are taking on the Alabama Crimson Tide. The number four ranked Buckeyes are unexpectedly leading the number one ranked Crimson Tide with nine minutes and fifty-three seconds remaining in the fourth quarter. A trip to the first-ever Division I National Championship game from a four-team playoff is on the line. But, the camera is not focused on the action going on the field. It is just an innocent shot of a couple watching the game. A brunette woman wearing a long-sleeved College Football Playoff t-shirt, Ohio State themed mardi gras styled beads, and a red "O" painted on her face stands next to a blonde man in an Ohio State jersey seated beside her. As the camera focuses on her, she purses her lips and puts both of her hands on her head. Next, the woman then scratches the head of the same blonde man seated next to her.  Suddenly she stops scratching his head. An awkward look comes across on her face, she seemingly looks around nervously and puts her hand in front of her mouth. The camera only focuses on the two of them for fourteen seconds before cutting to something else. What do you think was going on? Could she have been nervous about the 21-yard punt by Ohio State, giving the ball back to Alabama at Ohio State's 23-yard line?  That's three yards from the red zone, meaning that the number one team in the country just has to go 23 yards to score a touchdown and they are only down six points. It seems like the game is in the balance after a bad play by their team and that would be enough to make a fan nervous right?
Instead, social media ran wild with this one. She was not nervous about the game. Instead, speculation centered around if this "female Ohio State fan had just been caught cheating on live television." That is where people went with it. People claimed that she was "busted," "caught red-handed," "trying to make another woman jealous," or "that she realized that she was on TV with someone, she shouldn't be seen with." And, that is the issue. Here is your daily dose of sexism. It is proof of how people love to make something out of nothing. Why is that when faced with a situation our imaginations run wild to "she's a side chick," and "her man is at home. Why do some of us proclaim "she must be cheating," "these hoes ain't loyal," and "she got caught/got what she deserved" instead of many other reasons? It is plausible that she was nervous about the end of the game. It is plausible that she was consoling her companion who was sulking. But, we did not go there because of our beliefs as a society. Beliefs matter! And, if a society puts out the belief that women are liars and whores, then rushes to judgment like this are what results. Welcome to our culture where many of us do not give women the benefit of the doubt and act like another person's real life is a tabloid reality television show. Welcome to a world where we make memes and jump to conclusions instead of doing right by folks. We can not live in a world that proclaims that women "can't be trusted" or "are up to no good." What we put out in the world and say about others matters. It is ironic that many were disappointed to learn that the man next to her was her long-term significant other. That narrative is not where they wanted to go. They did not see her as a person with a name; they saw her as someone up to no good. Will you remember that the next time you about to say something negative about a woman that she is a person and that she has a name?