When the Mob Rules 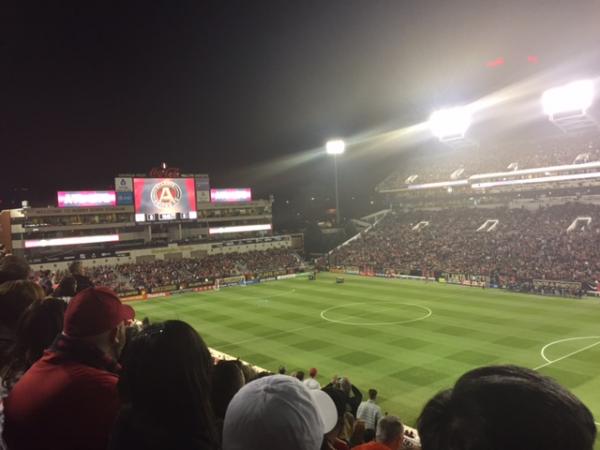 Sports culture often displays norms in our communities. It is a place where society tells us what is okay and what is not. Sports culture is often a reflection of our values, our beliefs, and our attitudes. An example of what a lot of us consider healthy happened in the unlikeliest of places this week, the inaugural game for an expansion Major League Soccer team. The scene was Bobby Dodd Stadium, the oldest continuously used stadium in college football, and home of the Georgia Tech Yellow Jackets. It's a stadium that has seen national champions play and visionaries like Nelson Mandela speak. But, on Sunday, March 5th, it held the first ever regular season game on the expansion Atlanta United Field Club. There was a lot to celebrate. The team took the field in their red, black, and gold jerseys. There was pageantry of a fireworks display, the national anthem sung by platinum R&B recording artist and Atlanta native, Monica. The Golden Spike, a new tradition harkening back to Atlanta's origin as a railroad town was hammered into the ground by a rap star. One would expect to hear something problematic from a musician, but the unsettling moment came from the fans.  A few times during the game fans chanted "Puto" at the goalie for the opposing team during goal kicks. After reading a story mentioning a homophobic chant, I decided to track down what was said. But, I did not know what that meant, so I went online to look it up. Puto in Spanish means male prostitute and some South American countries means homosexual. So, a crowd of Atlanta United fans decided to use this term to shame a player from the opposing team. The shame of it is that it was a choice that fans made that marred a remarkable night. The Atlanta skyline looked amazing under a clear night sky, yet some of the 55,000 fans in attendance chose to bring foolishness to the pitch to mar an otherwise superb debut. The story that I want to tell myself is that the fans who were chanting this were joining in the crowd and that they did not know what they were saying. That is still a problem, though. When we participate in hate speech, we are all part of the problem.

To the Atlanta United FC's credit, they came out immediately and condemned the use of the puto chant. The team spokesman made a statement saying, "[the] Atlanta United does not support or condone the use of offensive language. We strive to foster a positive, enthusiastic and inclusive environment for all fans, and inappropriate chants have no place at our matches. Fans found to be participating in this behavior will be subject to removal from the building." A statement like this is the kind of stance we need from institutions in our communities. We need institutions to not excuse bad behavior. We need institutions to take a stand to hold people accountable.