When the Wrong Problem Gets Solved 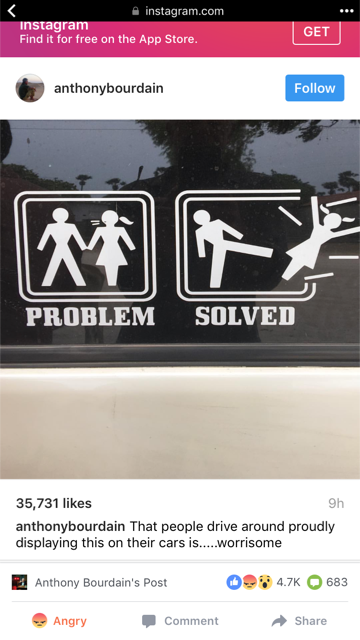 The things people share as jokes are often telling about their beliefs and attitudes about various subjects. Recently, Chef Anthony Bourdain posted an image on his Instagram that that illustrates this issue. The story I am telling myself is that he was out in the world when he came across something disturbing to him on another person's vehicle and decided to share it. In the photo Bourdain posted, we see a bumper sticker featuring two sets of outlines of a man and a woman standing next to one another. The first set of silhouettes features the word "problem" under the man and woman; it is also important to note that the woman seems to be talking to the man in the first image. Immediately to the right of the original images are two more silhouettes featuring the same male and female figures. In this depiction, the male figure has kicked the female figure causing her to fly off the image. The woman has stopped speaking in this image and word under the scene where the man is kicking the woman reads "solved." There is a clear message in these two images. The message is that talking women are problematic or annoying. But, there is another message conveyed by scene. The message is that men are justified to use violence against women to "solve the problem" of women talking. To his credit, Bourdain calls out the person displaying this on the vehicle with the caption, "that people drive around proudly displaying this on their cars is...worrisome". He's right, and there is no other way to interpret this sticker. It is disturbing. It implies that when women speak, what they have to say is not as important as what a man has to say. It implies that women talk too much. Lastly, it communicates that what women have to say is not as important as what men have to say. The beliefs here lead men into thinking they have the right to interrupt, patronize, mansplain, or talk down to women in their lives. These beliefs are rooted in sexism and are not okay. Someone made a choice to put this sticker on their car because they thought it was funny. But, more important than their finding humor in it was that they thought it was true. These images wistfully harken back to the "good old days" when women were to be seen and not heard. The intent is clear. But, there is more than that going on here. The images also authorize men to use violence to control women when women talk too much and get out of line. How are the women in this person's life impacted when they get out of line? How likely are this person's relationships and interactions based on safety, equality, and respect? There's a clear hierarchy regarding speech and whose speech matters most. And, the consequences of this belief are apparent all over our world; we live in a world where women are disproportionately affected by violence at the hands of men. Beliefs like this lead men to justify their use of unjust and unspeakable violence against women. Bourdain's method of calling this out as wrong is precisely what we need from everyone in our communities. If we are truly dedicated to safety, equality, and respect, then we practice that in our words, actions, and beliefs. What are you going to do when confronted with similar forms of sexist speech? Will you call them out or stay silent?