Why "Plowing Ahead" Is Problematic 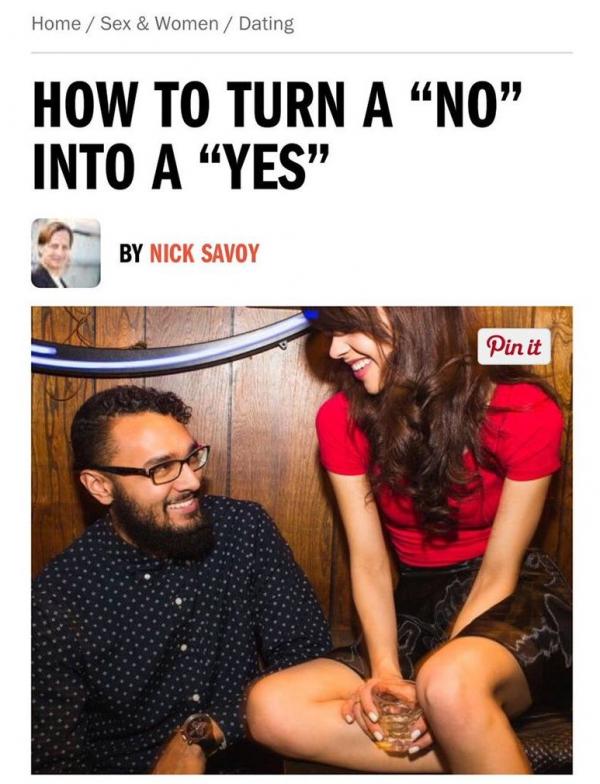 In a previous blog I talked about our teachers and related it to former Stanford freshman Brock Turner as he is a perfect example of how men’s beliefs and attitudes affect how we show up. Our beliefs and attitudes shape our values and justify our behavior, both good and bad. A perfect example of bad behavior being promoted by our culture is the article published by Men’s Fitness article titled, “How to Turn A ‘No’ Into A ‘Yes’” by Nick Savoy. Savoy’s article “shares proprietary techniques for turning a ‘no’ into a ‘yes’: 1) at the bar, 2) on a date, 3) in bed, 4) and in a relationship”. Part of the appeal of this article is that it is listed under the women and sex section of the magazine dealing with dating.

The first technique the article outlines are for use at the bar. Savoy wrote, “if a girl isn’t into you on your first approach, try one of these things…plow ahead anyway”. There is no much in that statement. First, there is the piece about “plowing ahead” and not respecting her no. The belief or justification men make when “plowing ahead” is that women are confused, playing games, confused, or liars. In other words, by engaging in this behavior men are saying that they know what is best for women and are best suited to tell women what they want and need. She could not be just saying no because she is not interested. This is problematic as it infantilizes women and teaches them that their voices and choices are not going to be respected, so it makes no sense to speak for their needs or desires. Later in this same section Savoy mentions his other approach is to “deal with it the same way you would deal with any other test – heighten it to absurdity and make a joke of it. Let’s say you’re at a bar or a club or somewhere where it’s unreasonable for a woman to get upset if a man approaches to make conversation. You walk up to her, but before you can open your mouth, she says, ‘Move along dork.’ You can respond right back with, ‘Oh, I love this game. Um, um…Ok. You’re a spoiled brat”. Here Savoy is writing that it is okay to be emotionally abusive to “get the girl” because the “ends justify the means”. In other words, it is okay to use manipulation and tricks in order to get what we want. In addition, there is something in this about women being in spaces where it is unreasonable to get upset when men approach them. Statements like this lead men to think that catcalling or sexually harassing behaviors are okay. They lead us to believe that women are always available and that we are entitled to engage them because they should always accept our advances. That is entitlement. Men have the belief that they have the right to women’s bodies and presence when it is not that simple. This thinking leads the belief that women play games and that all a man needs to do is keep asking because we are going to get what we want by breaking her down. Teaching guys to use these methods at bars, on dates, in the bedroom, and in relationships teaches men that they do not need to listen to or respect women’s choices. This is the epitome of why we have rape culture. None of this is really respectful, but there is more here underlying the surface.

The article even goes further to state, “every guy gets rejected sometimes…what separates the men from the boys is how quickly you can turn things around.”  So, let us talk about that. All of this talk about men and boys is code for who is a real man. What are societal messages about a real man and masculinity? A real man is in control. Moreover, a real man is in control of his woman. So, one is not a real man if there are not successful with women or in control of them. This is an awful message to give out to men seeking dating advice. So much of this is problematic. There is also a bit of the belief that women do not want to be seen as easy, so the justification men make in engaging in this behavior is that they are allowing women to play “the good girl”, so hearing the ‘no’ is just a cue to work harder or overcome that initial rejection. How about we tell men when we hear are no to hear her no as a no and leave her alone.

Even the title picture that accompanied the article is problematic. It displays a handsome man smiling and engaged in conversation with a woman who is seemingly just as engaged with him. We know that this is not the reality. If someone says no what would it mean to hear that no? What would it mean to hear that no as a request to end the interaction rather than as the beginning of negotiations? Whenever I have said no as a man my no has been heard loud and clear. Is it too much to demand that for the women and girls in our lives? I would like to think they just as much deserve to have lived lives of peace and autonomy without having to justify their choices or deal with sexually violent behavior from men. Thankfully Men’s Fitness pulled the article after an outcry on social media. But, it says something about the beliefs and attitudes out in the world that the article was even published as advice on dating and relationships in the first place.