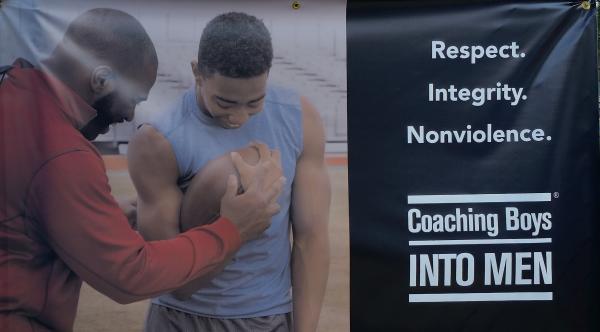 That is why positive relationships are key to prevent sexual violence. Coaches are involved in their athletes’ lives and many are already doing similar work. A good coach who knows when there is trouble at home. A coach knows when an athlete is struggling with a particular class or having challenges in a romantic relationship.  Some coaches may see an athlete more daily than their parents during a season with hectic practice schedules. The beauty of the coach-athlete relationship is trust. If a coach can teach an athlete about proper form during a squat or how to run a route correctly on the football field, then a coach can teach that athlete about other aspects of life. Young men are influenced by the adult men in their lives about how to treat women and girls. And, sometimes young men do not have adult men living with them having these conversations.

CBIM accepts that most coaches do not have the ability facilitate conversations in the same way as a trained advocate working in violence prevention. So, the coaches are trained to deliver the program and provided with support in the form of technical assistance and a series of cards giving them guidance about leading approximately twelve ten to fifteen minute lessons over the course of an athletic season. The card series covers topics like respect, personal responsibility, insulting language, disrespectful behavior towards women and girls, equality, bragging about sexual reputation, and consent. CBIM utilizes the connection that coaches have with their athletes, but it goes further than that. CBIM leverages the influence coaches and athletics have with their athletes to encourage them to make choices that will lead to healthy beliefs, behaviors, and successful lives. Most coaches are teachers and chose that profession because they wanted to have a positive impact on the lives of young people. They can readily recall coaches and teachers who had positive impacts on their lives, so they want to have a similar impact on their communities. They want to foster positive relationships with young people that set them up for success. That is the epitome of what it is to coach.

I think about the coaches and teachers that taught me powerful lessons about life, accountability, responsibility, respect, and maturity. Several taught me lessons that still influence me. One example is a band director who said “If you are on time, then you are late” one day when we were meandering into marching band practice as it began. Despite hearing that phrase years ago it stuck with me. Am I always on time? No, but the fact that the phrase is something I still recall when running late proves that it made an impact. If a coach can teach students about accountability in regards to getting to practices or meetings on time, then that teacher can provide tangible lessons to young people in regards to violence against women. If I walked into a practice and spoke to athletes for an hour what I had to say might resonate with a few of them, but it likely would not be as impactful as a coach with a positive relationship with those young men talking about it on an ongoing basis. It is all teaching. Moreover, their coach will have more influence than I ever could because they will be there day after day addressing issues as they come in the locker room. What would it mean if every young man had a coach in their life like that? What would it mean if every young man had a chance to have these conversations? It means we would make real headway in ending sexual violence.